This game is a real time strategy game set in the Star Trek universe, telling the story of four factions, the Borg, Federation, Klingon and Romulans, who fight each other for different reasons. It features a 20 mission campaign as well as a multiplayer for up to 8 players. 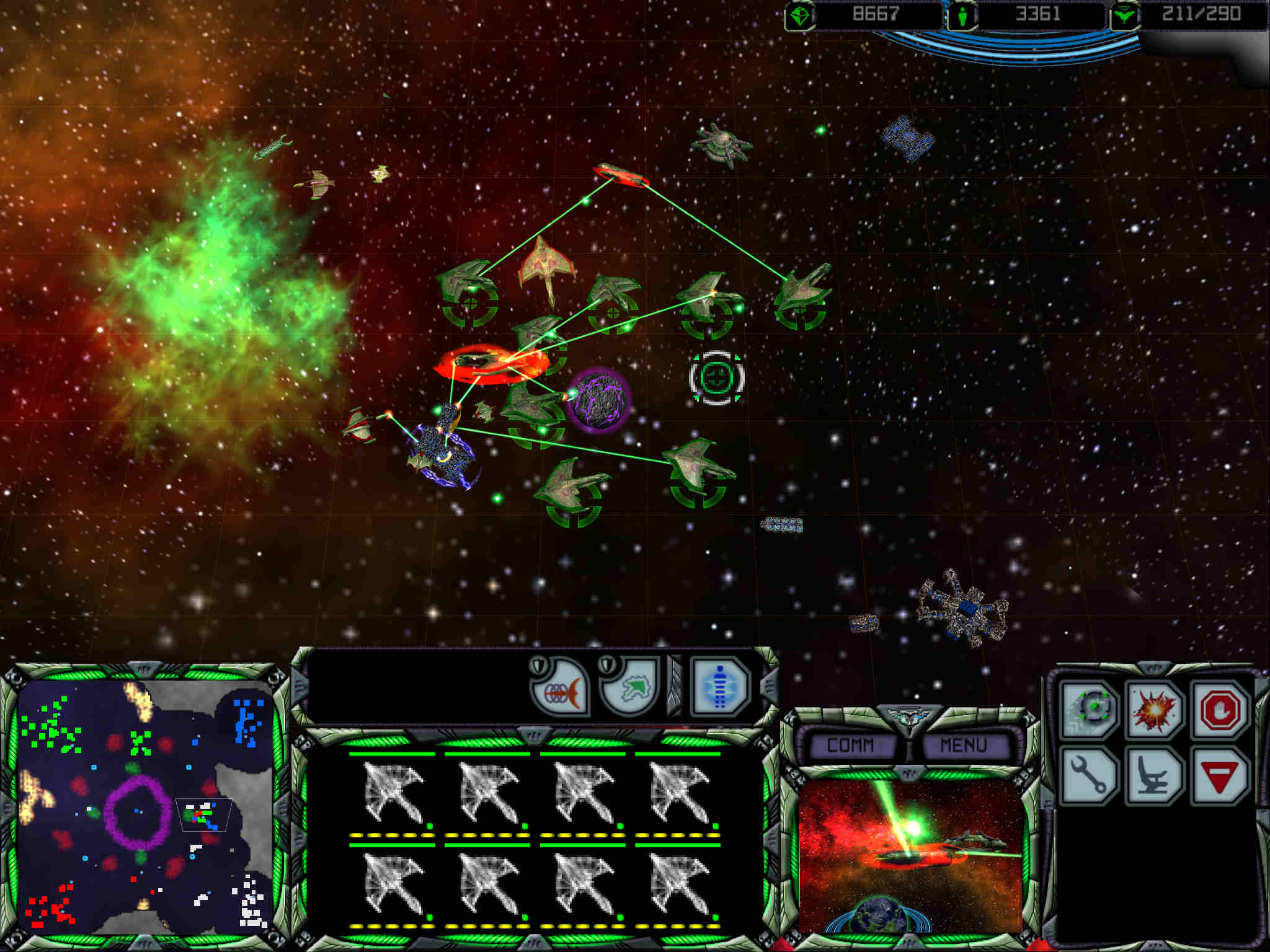 The game allows for multi-player matches with up to 8 players or up to 7 bots. The multiplayer works only via LAN, VPN or GameRanger. The WON network is long gone, so the usual multiplayer functions via internet are not available any more. There is no coop campaign but playing together against AI opponents is possible.

The game originally came released as a CD version on 22nd of March 2000. This version has some problems, like crashes on modern Windows and unstable network play. The GOG version released on 13th of December fixes some of the limitations and problems and is in general the recommended version.

The game only supports 4:3 resolutions, unless patched with community patches.

The game's campaign consists of 4 missions for all 4 factions + 1 final campaign with another 4 missions.

In this version the copy protection in form of the CD check is removed. It starts properly on Windows 98 and newer and provides for some additional tools, like the GOG DX-Wrapper and the IPX Wrapper. It is in general more stable, especially the network play. The limitation of only 4:3 resolutions up to 1600x1200 still exists, but with the 1.3 Patch this limitation is gone, too.

This is a wrapper for the used DirectX API. It can enhance the game experience in terms of look and feel. It works best in combination with a resolution patch, e.g. the #1.3 patch. If you ever face difficulties, try changing settings here. Often that already helps. Use the provided dxcfg.exe to change the settings.

Armada originally came on a CD, which was checked for by the installed game. So when playing it today, you need the CD in your CD-ROM drive or at least an image of it mounted. Also it is not multi-player compatible with the GOG version.

It will not start on Windows newer than XP without a DX wrapper patch. Without a patch the network performance is really bad (desyncs very often/early) and on modern systems with much RAM it is very likely it will crash anyways, when starting. This is why the CD version is not recommended. Better use the GOG version, if you want to play multi-player. If for some reason you want or have to use it, look here for additional information.

There is a community patch from the same team as the Fleet Operations Mod for Armada II out there, that sets the game' version number to 1.3.0 and fixes the following problems, resp. adds the following features:

The installer won't work on Win 98, but you can use the (only) file WonInterface.dll from another installation as replacement for the original.

The old Direct3D 7 has an issue, where games trying to use any resolution higher than 2048 in x- or y-direction always crash. Normally this would not be an issue, but with resolutions made available by the 1.3 patch it becomes one. The D3D patch fixes this particular problem.

For network multiplayer TCP/IP is possible, but only on a local network/VPN or with GameRanger. The CD version is known to desync frequently. De-syncing will (after a while from occurring) lead to vastly different game states on the different players sides. GOG version is still not impervious to that problem but works a lot better.

The CD version requires a CD inserted at at least one player's CD drive for up to 4 players and 2 players with a CD inserted for 5 players and more, to properly start a match. The GOG version does not have this kind of limitation. But all players require the same Armada.exe file. If people mix up e.g. the GOG and the CD version or a cracked version and the GOG version, the open games will not be found. Only if the game versions match each other, open matches can be seen and joined. Same goes for game rule files like ODF files in the addon folder. In general, unless playing a mod, a clean (mostly unaltered) installation of Armada is recommended for multi-player.

The multi-player requires DirectPlay installed. During the first attempt to join or create an Armada match, you might get asked by your Windows installation, whether or not you want to install it. When this happens, confirm it.

IPX is a network protocol that is an alternative for TCP/IP. The provided wrapper ipxconfig.exe from the GOG version allows for the IPX protocol to still be used with Armada. It is not really required, as the TCP connections works just fine. Games played via IPX show up considerably faster in the server browser than with the TCP protocol. But that's essentially the only advantage of it right now.

The Auto-Assimilator Weapon Sound does not Stop

It happens (rather often) that the special weapon of the Assimilator unit of the Borg is used, but once it is not used any more, its sound continues indefinitely. This can easily be stopped by shortly opening the game's menus (CTRL + x) and closing it. Once the menu is closed, the sound will be gone.

Mouse Pointer Stays in the Center of the Screen

It happens from time to time, that the Windows mouse pointer is visible at the center of the screen and won't go away on its own. This can also be solved by opening the menus for a moment (CTRL + x). Once the menu is closed, the white pointer will be gone.

Message The host of this game has been lost. Appears

When using the game for the first time via network, it might happen that you can see an open match but when trying to join it, the message The host of this game has been lost. appears. If that is the case, then a firewall might partially block the server from getting connected to. In this case unblock the Armada.exe. When playing via VPN do not turn your entire firewall off.

The game is known to crash from time to time. The CD version is affected a lot more by this problem, than the GOG version. The exact reasons are not known, yet. Some people claim, that certain units or special weapons have a tendency of crashing the game. But when trying to reproduce the problem, it does not always seem to happen.

One of the Diamond’s special abilities are the Nanites. This makes the interface elements positions getting scrambled. This should revert to normal, once the effect wears off. Sometimes this does not happen. If that is the case, then use ALT + CTRL + F9 to reset the interface manually.

Especially the CD version is known to desync game states frequently. This might even happen on LAN, though it is more likely to happen on internet matches. The exact reasons are still not clear. Once this problem happens, it is actually advised to end the match (as is recommended also by the game itself). After a while the game state will differ significantly at each players side, so it does not make much sense to continue the match. There are also known problems when altering certain files in a certain fashion, that lead to de-syncs rather early on in a match. So when facing this issue pretty much every time (especially when using AI players), try it with a clean installation for every player.

For other problems, see also https://www.mobile-infanterie.de/wiki/doku.php?id=en:games:star_trek_armada_1:known_problems.

Screenshots work (on Win 10) with ALT + WIN + PRINT in-game. Score-screen and menus can be captured with PRINT key and pasting to a graphics editor.

For novice players it is rather puzzling, how the drop down menus of Armada are supposed to be used. When opening a selection menu, e.g. the Side selection during multiplayer setup, keep the left mouse button pressed, when dragging the mouse pointer. The item that will end up selected, when releasing the mouse button, is the currently highlighted one. If you use the 1.3 Patch, the resolution selection is specifically strange. The developers hat to make room for the higher number of now available resolutions. So they made the items overlap each other slightly, fitting in more of them. This also means, selecting an item will only work if you keep the mouse pointer in the upper half of an item. The highlighting will show you, which one is selected currently.

It is actually an intended behavior for the AI to cheat. It even got intensified with patch 1.2. This can be seen easily with no fog of war and no shroud option. It does so in the following ways:

You can safely exit a running match, even when being the opening host. The game uses P2P connections during the match, so there is no player with a special role any more, once the match has started. But it does make a difference, how you leave the match. When giving a match up, all your units and buildings are removed from the map. But when aborting the mission, a medium AI takes control of the abandoned player slot.

There are mods out there. See ModDB on that topic.

The UI elements of the game can be ALT-dragged to different positions. CTRL + ALT + F9 resets it to normal. And you can zoom in/out by pressing + / - on your num block. Same goes for turning the map. / / * will turn the map. H will reset both and jump to your starting location.