This game is a first person shooter, telling the story of the USS Voyager’s newly formed Hazard Team, a kind of professional task force for dangerous away missions. It features a singleplayer campaign as well as multiplayer, the so-called Holomatch. It is very often referred to as EF or EF 1. 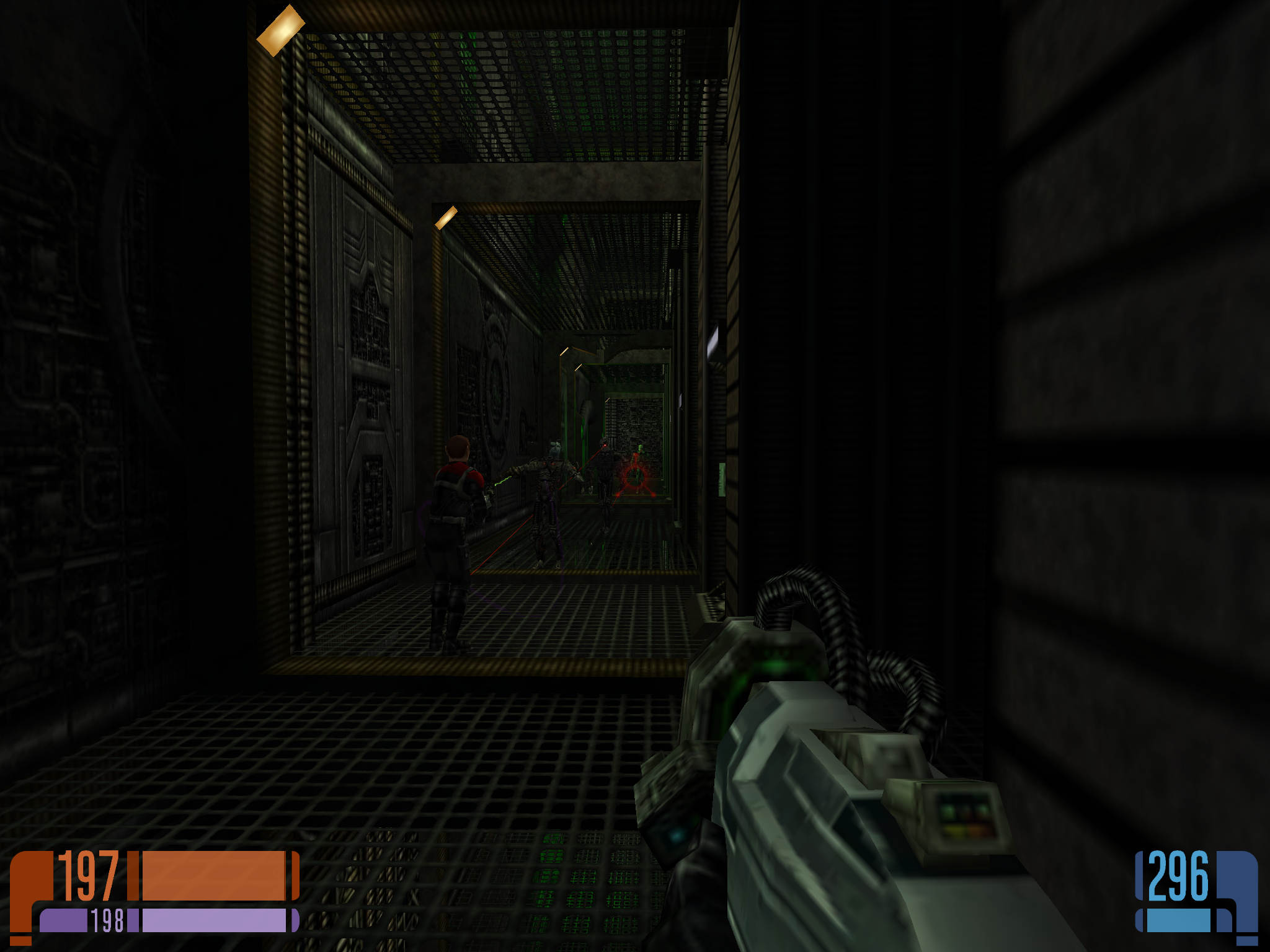 EF was released in late 2000 and is based on the Quake 3 engine. As such, it ran under Windows and MacOS. Like the majority of software products, it has some bugs, even in Raven Software’s latest release, version 1.2 (often referred to as vanilla EF). Some of them are more of a convenience nature. Others are security bugs with more serious consequences.

In the mid 2000s Thilo Schulz used the freshly released open source engine for Quake 3 (ioQuake3) as a basis to recreate the EF 1 multiplayer. This gave the possibility to fix many of those bugs and introduce new features. If you intend to play on the internet, it is strongly advised to use some of the following replacements. If you only intend to play the game locally, you may not need, but quite likely enjoy the benefits of them, too. Some of the improvements are:

If you do so, please be prepared for the fact, that configuration files may be placed somewhere else than in your EF game folder and may be named differently. See sections Config Locations and Names and Config File Names on the matter.

In order to use these binaries, simply place them inside your EF game folder and run the corresponding executable. The dedicated server binary's name ends on _ded, the Holomatch binary does not. This will not require replacing any existing files, so you can keep using the original files, if you choose to, as well.

This is the first incarnation of new EF clients, created by Thilo Schulz. As it is a bit out-dated today, we do not recommend using this any longer. But we specially thank Thilo for making the following projects possible with his work!

This offspring of Thilo’s ioEF is still maintained and aims more at being compatible to original EF 1 and behaving much like it, altering only some conceptional quirks and technical issues. It is more conservative, so to say. It runs on Windows, Linux and MacOS. You can get pre-compiled binaries (e.g. replacement .exes) here. Please revisit it from time to time, as newer releases are built at irregular intervals. Thanks go to Zack Middelton for maintaining this project.

cMod is very similar to Lilium Voyager and ioEF but puts less emphasis on behaving just like original EF. It includes some more experimental features but in doing so, adds a lot more functionality. For instance the filesystem code has been replaced and diverges a lot from the classic behavior of EF1, Quake3 and other related titles. Some mods may not run with it, due to these changes. It too runs under Windows, Linux and MacOS. It is under active development, so you may want to revisit the cMod website for the latest versions of it. Thanks go to Noah Metzger for his efforts expanding the frontier of EF clients.

Problems with the Installer

EF runs rather stable, once it is installed. But the installation process itself has gotten a bit problematic over the years. This section covers the installation via the original installation CDs. The GOG version should not have the below mentioned problems.

Installer does not Start

On most modern systems, Windows comes in its 64 bit flavour. That's actually a good thing, as it allows the system to address more than 4 GB of RAM natively. But as Microsoft decided to remove the 16 bit subsystem for 64 bit Windows, old 16 bit executables won't run there natively. So the 16 bit Windows executable (Setup.exe in the CD's root folder) run by the auto play feature of Windows won't start. That is actually not a problem though: Simply start Setup.exe from the Setup folder on the CD instead. But you still might experience the problem from the next section, when doing so on Windows 10.

It is known to happen, that the original Installer from the CD does not completely progress through the installation but hangs at some point. In general the installation should be fairly fast progressing on a modern computer. So if the installer seems to be not continuing after 10 minutes, it's likely you are affected by this problem.

Solving this problem is rather easy, following these steps:

After doing the above steps, the installer should continue, as usual.

In general, if you are trying to transfer your installation from one computer to another (or reinstalling Windows) you can simply copy/backup the game folder and the configuration folders (when using a newer client), as the game does not need to be installed newly, to run properly. You can even try and install the game manually, by copying the required files from the CD, if you need that. The bare minimum files for a complete, vanilla EF 1.2 installation incl. the Expansion Pack are:

All other files are optional or configuration files. So for cleaning up an existing EF installation, delete all files except for the above. The game will then behave as if freshly installed. The start menu and desktop links are not included, so you might have to create them yourself. If you do not intend to play the single player anyways, you might also skip the dll files and stvoy.exe as they are only part of the single player.

If you use the original 1.2 release of EF (that includes also the GOG version), then the game may behave strangely, being very dark and not respond properly to the brightness adjustment asked during the first launch. This is due to a design decision, made into a problem since Windows XP. It is solved by later variations of ioEF (see section Improved Multiplayer Clients/Servers above). If for some reason you must or want to use the original release anyways, do the following steps:

This should get rid of the problem, although now looking a bit too bright. But this way around you can at least see what’s going on.

The reason for this strange behavior is the following: The original game is asking the hardware to adjust gamma values directly. As hardware gamma affects the entire systems graphics output, all connected screens are affected (brightened up), which usually is not a desired effect. Therefore modern drivers usually refuse to enable such a feature, hence EF keeps being displayed darker than intended, as well.

In general if you want to play via Internet, there are two default ways to connect to a game server: You either enter the IP and the port directly into EF or you youse the in-game server browser. Game servers can announce themselves to so-called masterservers, keeping track of announced game servers. The game can request that list of servers. From a player's perspective he would simply refresh the server list and pick one to his liking. The game comes with two default master servers configured, that you would normally query:

While the first one is currently up and running (thanks to some people at Raven Software who have been maintaining their masterserver for the past 20 years), the latter never worked properly with the original EF clients to begin with. It is not advised to remove Raven’s masterserver, as it is the standard server. However, you can add additional masterservers, in case the main server fails. At the moment these servers are also available:

In order to do so, modify the hmconfig.cfg by changing one of the sv_masterx cvars. x can be chosen from 1 to 5. So you can have up to five master servers, which can be queried then. We advise you to keep the sv_master1 set to the default value. Most if not all game servers should be available via one of the above mentioned master servers.

Use the Desktop’s Resolution (Not for Vanilla EF)

Most users use the screens native resolution for their operating system already. So the game could simply pick that resolution automatically. That’s done easily by setting the cvar r_mode to -2 (seta r_mode "-2"). This however, will fail with vanilla EF.

If you want to use a completely different resolution, you might use the following settings in your configuration file:

with x being the resolution in horizontal direction and y in vertical direction. Please make sure you only enter resolution values/combinations here, that are actually available for your hardware. Otherwise the game will crash when starting it with wrong values.

Be aware, that the changing of resolutions might influence the look and feel considerably, especially in-game and when using wide screen resolutions. For a slightly better experience, also alter the cg_fov variable, according to the aspect ratio you set:

The following sections do not apply to the GOG version. So you might simply skip them, if you use the GOG release.

There were apparently some CDs shipped with a CD key that was wrongly too short with only 17 characters. In these cases, it helps to append a 0 in case EF asks for it. If another one has already been entered, open the file efq3.key in the baseEF folder of the EF installation and add 0 as the 18th character.

No CD Key Included, Despite Query

If you install the EF version from the Star Trek: Action Pack, this query will appear. You can cancel the dialog here and continue installing without it, because the installer installs the CD-key afterwards anyways.

This error occurs during starting the game, when EF does not have enough memory available, or vice versa, too many/big maps, models and other extensions are loaded. By default, EF does not use all available RAM of your system. You have to raise the limit yourself: Either you type /seta com_hunkmegs x into the console, with x as the amount of memory you want EF to use. Or put seta com_hunkmegs x in the config file. Alternatively you can of course clean up your EF folder and remove maps & stuff you no longer need. However, it is also sufficient to move the less frequently used *.pk3 files to another folder that EF does not access (e.g. create a subfolder Backup). Similarly com_zoneMegs or com_soundMegs might also need to be increased. A good value would be 256.

Many settings and some features are only available either by editing the configuration files or by entering the data into the console of EF. By default the console is available by pressing the key below the ESC key (left of 1). On a UK layout keyboard this is ¬, ~ for US layout and ^ for DE layouts.

Be aware: Some settings cannot be set in this fashion. They have to be provided already during game/server start, which only works by providing the parameters via CLI, a skript or setting it in a .lnk file.

Other Useful Resources and Information

As there are multiple variations of EF floating around (see section Improved Multiplayer Clients/Servers on the matter), the locations and names of the configuration (and mod) files may vary:

The network performance heavily influences the game experience. And the settings for network play heavily influence the network performance. So in essence your net settings can mess up the game for you, even when everything would be technically quite able to accommodate something better. Here are some settings, that should be placed in your hmconfig.cfg file. The default values still allow you to play online, but these here are a lot better.

Many players use nick names, that are colored in some fashion. This is done simply by using ^number inline of the name. The number can be:

So a nick ^1Red ^4Baron would look like Red Baron. This also works for other elements, such as map names or server names.

Some Abbrevations hold special meanings in the EF context:

Here is some additional information that might be useful, especially for new players: